What is the Difference Between a Green Card and a Visa?

The primary difference between a green card and a visa is that the visa is only a temporary pass that lets you enter the United States and remain there for a specific period of time. Whereas the green card is a permit that does not only allow you to enter the US. Continue reading to learn more. 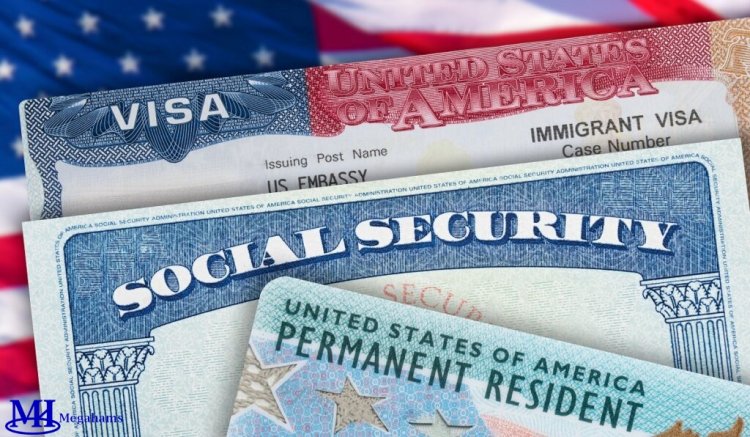 Green cards and visas are both government-issued documents for foreign nationals that give the holder certain rights to stay in the country of issue. The terms green card and visa can mean more than one thing and even overlap a bit. Green card holders usually enter the country using a visa. But not all visa holders have or will get a green card.

What is a Visa?

A US visa is an entry permit. It is a document that allows you to travel to a US port of entry, airport, or border crossing to ask permission to enter the United States. A visa is prepared by the US Department of State (DOS) and given out by one of its consulates or embassies around the world.

Moreover, once you have been approved, you will get your visa stamped into your passport. Physically, a visa usually appears as a stamp in one's passport. When you receive instructions to go to a US consulate to pick up your visa, it means that you will be getting this stamp or an equivalent document that allows you to enter the United States.

However, the border patrol always reserves the right to turn away a visa holder for a variety of reasons. That is to say, possessing a US visa does not guarantee you will be allowed to enter the United States. Rather, it shows that a US consular officer has decided you are eligible to seek entrance for the specific purpose stated on your visa.

Therefore, the US Customs and Border Protection officer at the border or airport ultimately makes the final decision whether to allow someone into the country. Nonetheless, arriving with a visa is a good indication that entry will be permitted.

Furthermore, there are 185 different types of US visas that allow foreign nationals to travel to the country for different reasons and different lengths of time. These types of visas can be grouped into 2 categories: immigrant visas and non-immigrant visas.

Moreover, the person will need to leave by the date shown on the I-94 issued by Customs and Border Protection (CBP) at the US border or entry point. However, that expiration date can be within a matter of months. Examples include the following:

This visa must be obtained before traveling to the United States. And is part of the process of getting a green card. Every immigrant visa needs to be petitioned for by a citizen of the United States. With exception to the winners of the Diversity Visa Lottery, asylum immigrants, and refugees.

Once you have had an immigrant visa issued in your name. You will be eligible for applying for a green card.

Moreover, the term "green card holder" is often used to refer to lawful permanent residents. The green card is often treated as a visa that can never expire. Unless the holder has been convicted for violating the terms and conditions or is found guilty of committing a crime in the immigration court. Green card holders can move on to apply for United States citizenship after three to five years.

How to get a green card

In most cases, to qualify for a green card, the applicant must have an immigrant visa already, and applications are made to US Citizenship and Immigration Services (USCIS).

However, the green card itself usually arrives by mail after the person either entered the US using an immigrant visa received from a US consulate; or after the person applied for permanent residence from within the United States (adjustment of status) and received a notice of approval from US Citizenship and Immigration Services (USCIS).

Furthermore, the types of green cards are more extensive than visas and can be obtained in the following ways, which include, but are not limited to:

What Are the Differences Between a Green Card and a Visa?

The primary difference between a green card and a visa is that the visa is only a temporary pass that lets you enter the United States and remain there for a specific period of time. Whereas the green card is a permit that does not only allow you to enter the US. But also lets you stay there for as long as you want. However, that’s not the only difference. Here's a side-by-side comparison of a green card versus a visa:

Furthermore, both applications for a green card and a visa are initially submitted at a local US embassy in your country. However, you receive an NVC (National Visa Center) package from the US for your green card. Which is not necessary for a visa.

With the exception of the processing fees which differ from visa to visa. The application fee for a US visa is $160. Then, the filing fee for a green card from outside of the United States is $1,200 plus additional fees as shown below:

Moreover, you will also have to cover other expenses for your green card, such as when you the help of an immigration lawyer with your case.

A visa is valid for 180 days. However, US visas can be issued for ten years with multiple entries. But you are still allowed to stay in the country for only 180 days per entry. A green card, on the other hand, is valid for ten years from the date of issuance. But if you are a conditional permanent resident, then your card is valid for two years. After which you have to renew your Green Card.

A visa is usually a stamp attached to your passport. While a green card is very similar to an ID in size and form, it's usually in plastic and is also green in color.

Processing time difference between a green card and a visa:

A green card may take up to three years to process. While the processing time for a US visa usually takes around 5 weeks or more.

You can freely work in the US with your Green Card but not with a visa. You can only work with a US visa if you apply for an immigrant visa that offers a pathway to permanent residence and eventually to citizenship, such as a spouse visa.

In conclusion, it is also important to remember that in most cases, foreigners must first obtain an immigrant visa to enter the US, and then apply for their Green Card. A US visa is for short-term visits, and it only offers a pathway to permanent residence in specific cases, i.e., a work visa. While a Green Card is a permanent residence permit that allows you to become a citizen in the US after five years of living in the country.

How to Get a Canadian Work Visa: A Guide For Newcomers

How to Apply for UK Spouse Visa