Top Provinces to Work in Canada as a Web Designer 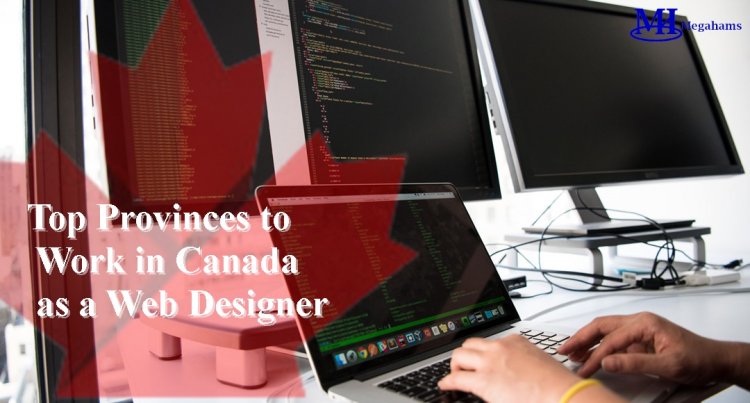 Generally speaking, you should not let anything disturb your mind If you’re looking to immigrate to Canada as a web designer. There are thousands of web designers just like you that are emigrating to Canada every year.

Web designers and developers are among the most sought-after skilled workers in Canada, featuring in priority immigration and work permit programs. Web developers are in demand right across Canada and you may be able to secure a Canadian Permanent Residence visa either with or without a job offer. Moreover, if you are a web designer and have been working as a web designer you may qualify to immigrate to Canada.

Moreover, people working as web developers have different job prospects depending on where they work in Canada. However, you can work for any of the IT firms across Canada. Your web designing services will definitely be required in several Canadian establishments.

Who Are Web Designers and Developers?

Web designers create and build websites from scratch. Moreover, they should be able to know how to build something that is easy to navigate, performs well, and looks good. As a result of the new age of technological advancement, many companies rely on their websites to sell products and services. Therefore, due to the importance of having a good website, web designers are in high demand in first-world countries like Canada.

Meanwhile, formal education isn’t the only way you can become an entry-level web designer. Many have degrees in IT and web design, where they learn to code and develop entire platforms. In this case, having a qualification and experience is crucial to securing a job in Canada.

How to Immigrate to Canada as a Web Developer

Furthermore, there are two programs that help foreigners immigrate to Canada as web designers or developers. These include the Express Entry and the Provincial Nominee Programs (PNPs).

You can immigrate to Canada as a web designer or developer through Express Entry's Federal Skilled Worker Program (FWSP). This immigration pathway can help you achieve your immigration objectives on time. This is great news for Web Designers the world over hoping to live and work in Canada.

Moreover, there's no doubt that you will have read online that having a job offer to move to Canada is a requirement for accessing the Express Entry process. However, as a web designer, you also have other options to secure your Canada Visa from the start.

Web designers are eligible to apply for Canadian Immigration under the Canadian Government’s Immigration program due to the demand for Web Designers in Canada being so great they have included the occupation on the targeted occupations list, known as the NOC list (National Occupation Code In-Demand List).

Furthermore, Express Entry for Canada is not a visa class at all, it is simply an online system that Canadian immigration uses to manage immigration applications from skilled workers for a permanent residency visa. There are 3 immigration programs managed through Express Entry:

And in that case, as a Web Designer looking to immigrate to Canada, we’ll be looking at the Federal Skilled Worker visa and Provincial Nominee program.

Moreover, you cannot only immigrate to Canada as a web designer or developer via the Express Entry but also through the Provincial Nominee Programs (PNPs). The programs work for workers who:

However, each province and territory has its own “streams” (immigration programs that target certain groups) and requirements. For instance, in a program stream, provinces and territories may target:

Moreover, how you will apply depends on which Provincial Nominee Program stream you’re applying to. You might need to apply using the paper-based process, or by the online process through Express Entry.

As part of the process, you will have to pass a medical exam and get a police check (certificate). Everyone must have these checks, no matter where they plan to live in Canada.

To be nominated by a province or territory, you must follow the instructions on their website and contact them directly. Moreover, the criteria by province and territory vary and can change without notice. The following are lists of nomination programs across the Canadian provinces and territories:

Top Provinces to Work in Canada as Web Designer

Furthermore, here are the top provinces to work in Canada as a web developer (NOC 2175):

There are over 5,000 web designer jobs in Ontario, and most of them are in the bustling city of Toronto. Many foreigners believe that Toronto is the best place to live in Canada. It’s a vibrant city with many employment prospects in the tech industry.

British Columbia (BC) is a prominent place to be a web designer. Vancouver for one is the biggest city in BC and has ample opportunities for technologically oriented individuals. With over 2,000 jobs available for web developers, and a Tech Pilot immigration stream to cater to you, it is ranked as one of the top provinces to work in Canada as a Web Designer

Just in Montreal alone, there are more than 1,700 web designer jobs and more around the province of Québec. You’ll have to make sure you send your qualifications to the province to ensure it's up to Canadian standards.

There are around 500 jobs available for web designers in Alberta, but employment is expected to grow and lead to new positions in areas like Edmonton and Calgary. Alberta also has the Alberta Accelerated Tech Pathway which allows you to immigrate to Canada if you work in tech, like a web designer.

Here are some of the frequently asked questions by foreigners who wish to immigrate to Canada as a web designer:

Can I immigrate to Canada as a web designer without a job offer?

The answer is yes, as long as you have a reasonable total CRS score on your Express Entry application and can meet the 67 immigration point threshold for your Canada Federal Skilled Worker Visa. Technically there is no minimum CRS score required to submit a Web Designer Canada Express Entry profile.

Of course, securing a job offer (documented in the right way for immigration purposes i.e. LMT) will give you an instant CRS boost of 200 points so it makes sense to start this process as soon as is practical.

How do I find a job as a web designer in Canada?

Some of the best ways to find a job are through the government-affiliated website Jobbank or job search platforms like Indeed.

In conclusion, not all provinces and territories in Canada have Provincial Nominations Programs, however, only 11 of the 13 provinces have these programs set up for skilled workers. For instance, British Columbia and Alberta have programs specific to employees in the tech industry. Quebec and Ontario, however, don’t have provincial nomination programs. Instead, you can use alternative programs such as the Quebec Skilled Worker Program to apply for Canadian permanent residency as a web designer.

Moreover, as a competent web designer with experience, you can immigrate to Canada and live in one of the most technologically developed countries in the northern hemisphere.

How to Apply for a Singapore Student Visa

How to Apply for Unskilled Jobs in Canada with Visa Sponsorship

What are the Costs of Studying in Canada for International Students